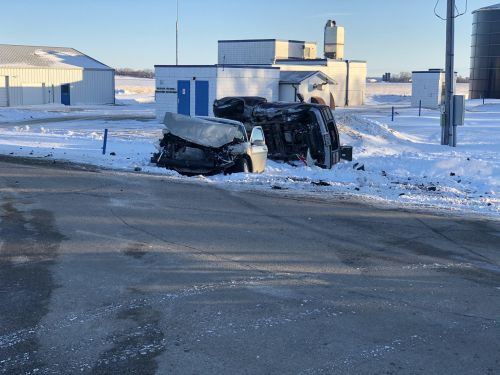 WATERTOWN, S.D.—One person was injured in an accident just southeast of Watertown Tuesday.

Codington County Sheriff Brad Howell says 23 year-old Ron Pope of Watertown was southbound on 457th Avenue and failed to yield at the intersection of 176th Street.

A car driven by 83 year-old Dorothy Tesch of Watertown was eastbound at that intersection, and struck Pope’s pickup on the side. Both vehicles ended up in the southeast ditch, with Pope’s pickup hitting an electrical box and coming to rest while it was in contact with live electrical wires.

The two occupants of the pickup stayed inside the vehicle while Codington Clark Electric crews de-energized the electrical box.

Tesch was taken to Prairie Lakes Hospital by ambulance.

Pope was cited for Failing to Yield.