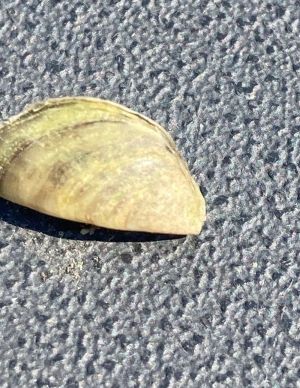 Pierre, S.D. – The South Dakota Department of Game, Fish and Parks (GFP) has confirmed the presence of zebra mussels in South Rush Lake in Day County.

“Due to the nature of water connectivity in northeast South Dakota, we will continue to monitor the situation and waterbodies within the region,” said Davis. “South Rush Lake is now considered infested with zebra mussels.”

GFP has significantly enhanced efforts to slow the spread of aquatic invasive species (AIS) in recent years, both educating anglers and boaters to clean, drain, dry every time they are on the water as well as physically inspecting boats prior to and/or after loading.

“Our message to ‘clean, drain, dry’ has been spread widely across the state,” said GFP Communications Manager, Nick Harrington. “Whether it be in your email, on social media, at the gas pump, or at the boat ramps themselves if you enjoy the water in South Dakota we know you are receiving our messages.”

To date in 2022, GFP has sent 1.8 million emails with AIS content, reached 341,000 individuals on social media, have reminders playing at 43 gas stations, and have placed signage at boat ramps across the state. These efforts have driven over 12,300 visitations to SDLeastWanted.sd.gov.

Boat plug compliance at all locations across the state has been between 93-100%.

“When we see such high plug compliance rates we know our messages are working. As we continue to work to slow the spread, new infestations such as this need to serve as another reminder to boaters and anglers the importance of doing their part,” concluded Harrington.

More information regarding AIS in South Dakota can be found at sdleastwanted.sd.gov.