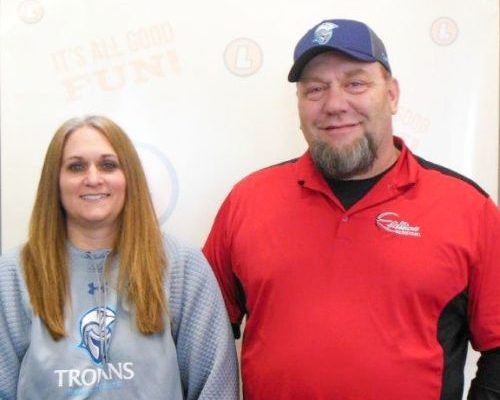 PIERRE, S.D. – The winning numbers from Saturday’s Dakota Cash drawing proved to be lucky for not one, but two players.

Jeffery Alley of Box Elder and Chad Saathoff of Estelline (pictured) each claimed their share of the $88,148 Dakota Cash jackpot, giving each a $44,074 prize. Saathoff purchased his winning ticket at the Country Corner in Estelline, while Alley bought his at the Loaf ‘N Jug in Box Elder.

Both players indicated that their purchases prior to the drawing routine but finding out they were winners was anything but ordinary. Alley and Saathoff each learned the news in different ways, but their excitement was a common theme.

“(Sunday) afternoon at about 6:30, my mom called and said that she saw a deal on Facebook that one of the winning tickets was sold in Estelline,” Saathoff said. “I pulled it up on my phone and laid the tickets beside it, and the numbers matched perfectly. It would be a constant bleep if I said my reaction. I was just hooting and hollering that I won.”

“Saturday night, I got on to my phone and pulled up (the Lottery website),” Alley said. “I looked up the numbers and saw that they matched. I was just pretty darn excited.”

The similarities didn’t end there. Alley and Saathoff each noted that they broke the news to their wives shortly after learning of their jackpot win.

“She was pretty ecstatic,” Saathoff said. “She was sitting beside me when I read off the numbers. The kids were also pretty pumped and the parents were pretty happy.”

“I told my wife we won, and she said, ‘yeah right’,” Alley said. “So, I had to have her come over and doublecheck the numbers to make sure I wasn’t misreading it.”

While all jackpot wins are unique, Saturday’s drawing had an added element with two winners. While both players didn’t receive the full jackpot, they are more than happy with the results.

“We won, then I realized that there were two and we had to split it,” Alley said. “You know what, a win’s a win.”

“I knew there was two before I looked at my numbers,” Saathoff said. “It wasn’t any real disappointment anyway.”