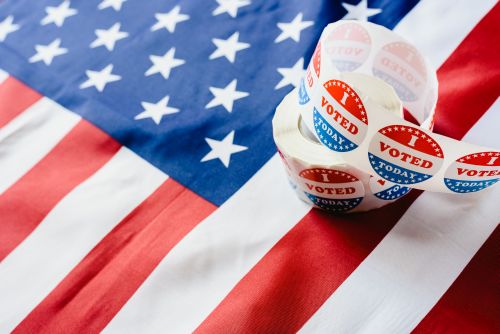 I vote today stickers roll, in US elections on American flag.

SIOUX FALLS, S.D. (AP) — South Dakota Gov. Kristi Noem planned a Monday reelection rally featuring a video message from former President Donald Trump in a final push to turn out voters in the heavily-Republican western part of the state, while her Democratic challenger, state lawmaker Jamie Smith, focused on the state’s largest city in a bid to make the race competitive by winning big in his hometown of Sioux Falls.

The dueling campaign rallies on Monday evening centered on the areas where each candidate is expecting to draw large numbers of voters. For Noem, it was in Rapid City, near where she held an Independence Day fireworks celebration in 2020 that featured Trump. For Smith, it was at Sioux Falls’ Washington Pavillion, where he once attended high school before the building was converted into an event center.

Republicans have nearly doubled Democrats on voter roles in South Dakota, but Smith said he was hoping to carry Sioux Falls with enough votes to buoy his chances of an upset on Election Day. A Democrat has not won the South Dakota governor’s office since the 1970s.