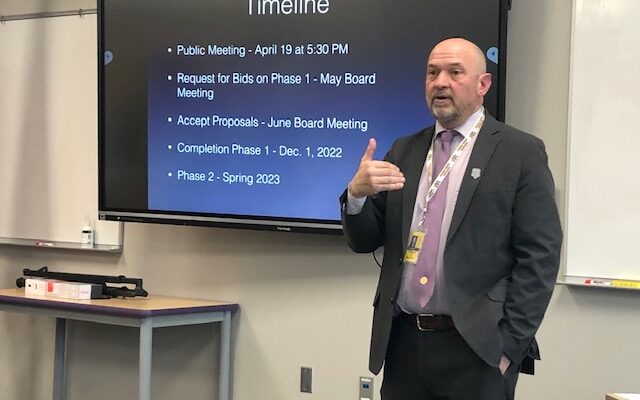 They heard from Tom Hurlbert and Jason Kann with Co-Op Architects, and saw artist renderings of what new athletic facilities could look like.

There were two issues that rose to the top at the meeting. First, the track at Allen Mitchell Field has fallen into such a state of disrepair, that Hurlbert says it’s, “unsafe” due to cracking and heaving and must be replaced soon.

The second overriding theme in the meeting was Watertown Stadium, which hosts Arrow High School football, and opened in 1941, is the worst football facility in the Eastern Dakota Conference. Some in the crowd referred to it as, “embarassing.”

Danielsen agrees with the architects that the track has to be replaced, which will be phase one in the athletic facility master plan…

A combined facility at Allen Mitchell Field could include a new artificial turf football stadium, along with new grandstands, concession areas, a fieldhouse and practice fields. The price tag for all of that would be at least eight million dollars….

Audience members also asked the school board to consider the needs of other sports like gymnastics and wrestling when considering facility upgrades.

The school board will meet in May, at which time it likely will consider whether to request bids to tear up and replace the track at Allen Mitchell Field.

Danielsen will talk more about athletic facility needs in the school district on Thursday morning at 8:30 on What’s Up on KWAT.