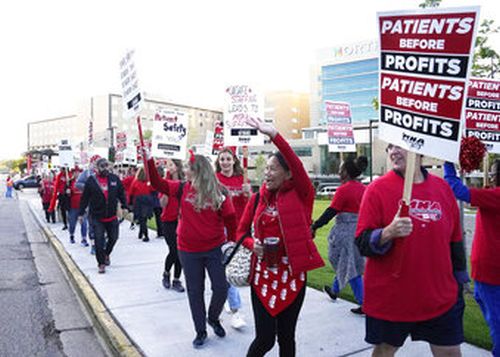 Striking nurses react the a honking vehicle driving by during the first hour of a strike Monday, Sept. 12, 2022 outside North Memorial Health Hospital in Robbinsdale, Minn. Nurses launched a three-day strike over issues of pay and what they say is understaffing that has been worsened by the strains of the coronavirus pandemic. (David Joles/Star Tribune via AP)

MINNEAPOLIS – Twin Cities nurses say they aren’t getting anywhere in negotiations with hospitals and they may authorize another strike.

In September, members of the Minnesota Nurses Association went on a three-day strike. After that, they said they were hopeful they could get back to the bargaining table and get a deal done.

But on Thursday, the nurses’ union says that hasn’t happened despite a number of meetings with their hospital groups.

On Nov. 30, the 15,000 nurses in the union will vote yet again to possibly authorize a strike. The nurses have been trying to get a deal done for eight months now. Clinics and hospitals in the Twin Cities and Duluth would be affected.

The Twin Cities hospital group coalition said it is committed to reaching a fair and equitable contract agreement. The coalition also said it has suggested mediation, but the nurses’ union continues to reject that idea.