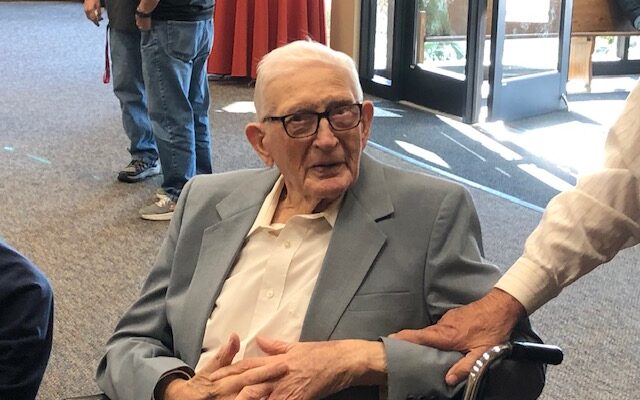 He grew up in Bryant, went to welding school in Sioux City, Iowa, then was drafted by the U.S. Army and was trained in chemical weapons at Camp Sibert Alabama.

Following basic training, Gerald was deployed to Italy and Africa during World War II where he worked on pipelines.

Gerald has been a longtime member of the Bryant American Legion, and will soon be moving into the StoneyBrook Assisted Living Center in Watertown.

Gerald’s wife of 75 years, Ardell, passed away in August at the age of 98.

Whereas, Gerald Dede of Bryant was born October 19, 1922 to Emma and Henry Dede, grew up on a farm with eight siblings and graduated from Bryant High School and,

Whereas, Gerald, after his high school graduation became a member of the Army during WW II and was stationed in Africa and Italy with training in nuclear warfare, and,

Whereas, Gerald married Ardell Olson of Hayti in 1947, had a daughter, Lana, and farmed near Bryant until retirement, and,

Whereas, Gerald and Ardell in recent years made their home in norhteast Watertown, and,

Whereas, Gerald was a lifetime Bryant American Legion member and also belonged to the Watertown VFW. He was a proud member of one of the early Honor Flights, and,

Whereas, Gerald and his wife Ardell recently celebrated their 75th anniversary on June 27, 2022, and,

Whereas, Gerald’s family and friends will gather on October 15, 2022 to celebrate the milestone of Gerald’s 100th birthday on October 19, 2022, and it is fitting and proper on this occasion to recognize this outstanding South Dakotan,

Now, therefore, I, Kristi Noem, Governor of the State of South Dakota, do hereby proclaim October 19, 2022 as Gerald Dede Day.