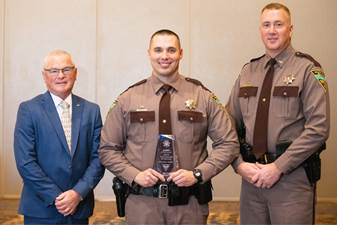 Trooper Miller, a Sisseton native, joined the Highway Patrol in 2014 after serving 11 years in the United States Marines. Among his additional duties, he serves as an instructor for firearms and is an Honor Guard member. This year, Trooper Miller also was selected to be a Police Service Dog handler.

The Highway Patrol is part of the South Dakota Department of Public Safety.