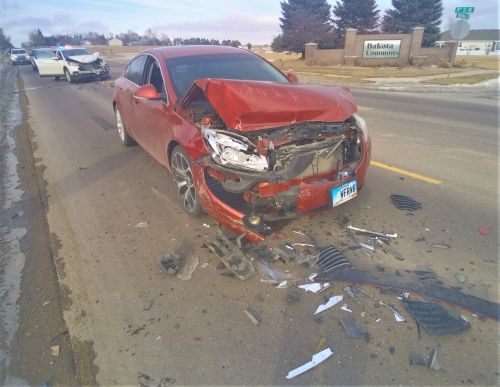 WATERTOWN, S.D.–There were no serious injuries to people, but plenty of carnage to the vehicles they were driving following a five-vehicle crash Wednesday afternoon on 19th Street near the Human Services Center.

Watertown police say the crashes occurred just after 3:30 in the southbound lane of 19th.

It began when a car that was stopping to turn into a parking lot was rear-ended from behind.

That began a series of collisions involving the five vehicles.

Two of the drivers involved were given citations for following too closely.

The vehicles involved sustained a combined $16,000 damage. Three of the five had to be towed from the scene.

All of the people involved were checked out at the scene by medical personnel with Watertown Fire Rescue.

The drivers ranged in age from 16 to 38. Their names were not released.