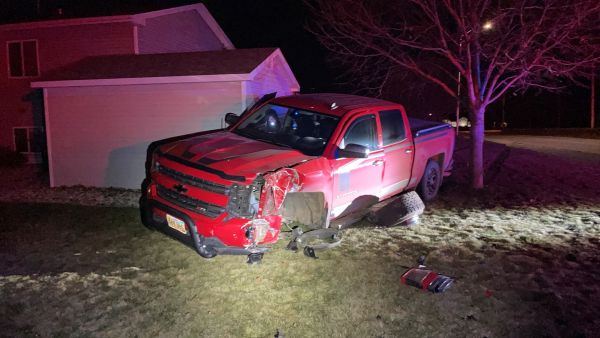 WATERTOWN, S.D.–A Watertown man was arrested for Driving Under the Influence (DUI) after crashing a pickup into the yard of a residence early this (Monday) morning.

Police Corporal Austin Nelson says police along with medical personnel from Watertown Fire Rescue responded to the crash in the 2000-block of 14th Avenue Northeast at 4:52 a.m.

They arrived to find a pickup had been traveling eastbound on 14th Avenue Northeast when it left the road, and collided with landscaping and a tree in the yard of a residence.

Nelson says the driver, 61 year-old Mark Kadoun of Watertown, sustained minor injuries in the crash. He was arrested for DUI, Open Container in a Motor Vehicle, and Careless Driving.

He was released from jail on a Personal Recognizance bond.

The pickup sustained an estimated $10,000 damage and was towed from the scene.