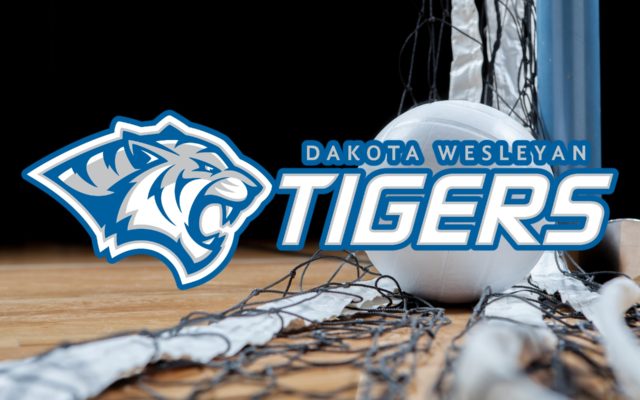 Later in the same set, Dwight collected another kill to keep DWU within striking distance. However, the Defenders pushed their lead to eight points before taking the first set.

The second set was a tug of war with 18 ties throughout. The Tigers started off strong with kills by Jadie DeLange (Monument, Colo.), Dwight, Buisker and Mackenzie Miller (Mitchell, S.D.). The Tigers could not shake the Defenders as Dordt pulled ahead to take a 17-14 advantage.

Thanks to multiple assists by Madeline Else (Holstein, Iowa), the Tiger offense came alive to regain the lead, 21-20. But Dordt scored four of the final five points of the set to take a two-set lead.

The Defenders opened the third set with a quick 6-2 spurt before the Tigers tied the game at 10. Mariah Gloe (Watertown, S.D.) tried to keep the Tigers close with a kill midway through the set, but the Defenders pulled away down the stretch to take the final set.

Gloe led the Tigers with 11 kills and 16 digs, while DeLange and Dwight each added eight kills apiece. Else recorded 27 assists and 10 digs, as the Tigers tallied six block assists and 52 digs as a team.

DWU stays on the road to take on Briar Cliff University in a GPAC tilt at 5 p.m. on Saturday in Sioux City, Iowa.