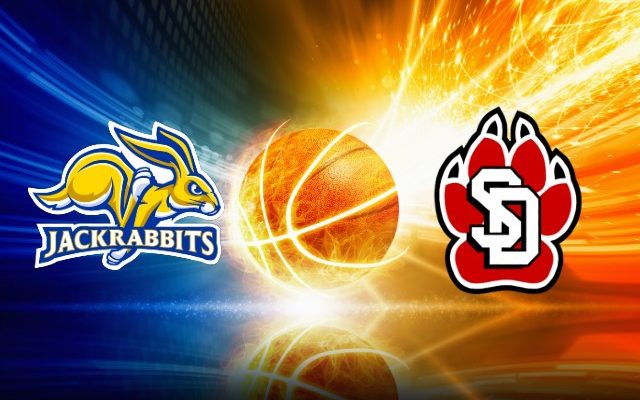 VERMILLION, S.D. (GoYotes.com) — In front of the second-largest crowd to watch a men’s basketball game in the Sanford Coyote Sports Complex (5,349), the South Dakota Coyote men took down its in-state rival South Dakota State in dominating fashion 99-84, snapping a five-game winning streak for the Jackrabbits and a four-game skid against its in-state foe.

Four other Coyotes scored in double-figures on the night, Triston Simpson (21), Tyler Peterson (18), Cody Kelley (13) and Stanley Umude (11). Ty Chisom finished with nine points off the bench for the Yotes. Peterson set a new season-high in points after going 8-of-12 from the field while Simpson’s 21 points were his third 20-point effort of the season and first since injuring his leg earlier this season.

South Dakota State’s Matt Dentlinger scored a career and game-high 26 points on 13-of-18 shooting on the night. Dentlinger also finished with a career-high seven assists and grabbed four boards. Alex Arians shot 4-of-6 from deep and recorded 16 points while David Wingett chipped in with 14 points for the Jacks.

The Coyotes will host Purdue Fort Wayne on Thursday at 7 p.m. inside the Sanford Coyote Sports Complex. South Dakota State hosts North Dakota State Wednesday in its lone game of the week. The Jackrabbits and Bison tip at 7 p.m. from Frost Arena.