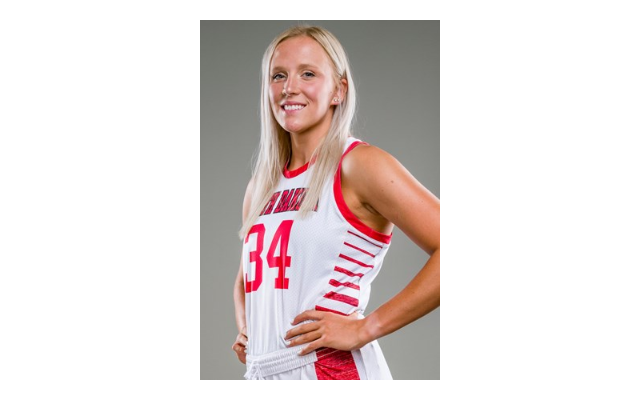 SIOUX FALLS, S.D.—South Dakota women’s basketball senior Hannah Sjerven has been named a semifinalist for the Becky Hammon Mid-Major Player of the Year presented by Her Hoop Stats.

Sjerven is one of 10 women named as semifinalists for the award. The list was whittled down from 15 women on the midseason watch list last month.

A native of Rogers, Minnesota, Sjerven leads the Coyotes with 16.5 points, 10.1 rebounds and 2.4 blocks per game this season. She has made a league-best 55.1 percent of her shots from the floor this year. She’s also the Summit leader in rebounds and blocked shots, ranking in the top-35 of NCAA Division I for all three categories. She was the first player in the nation to record a 30-20 game this season with career-bests of 31 points and 21 rebounds at Bradley.

The Coyotes wrap up an eight-game Summit road stretch this weekend with a pair of games at North Dakota on Saturday and Sunday. Tip-off is scheduled for noon both days.