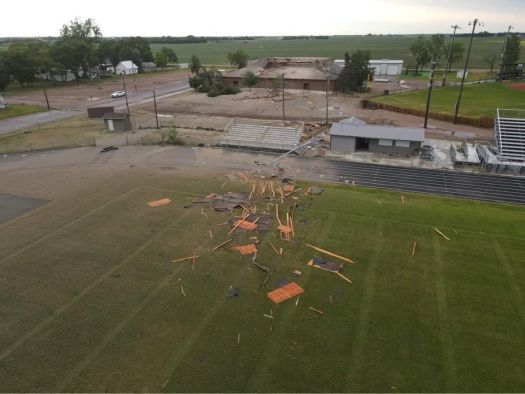 SALEM, S.D. The newer part of the armory roof in Salem, South Dakota, is spread across the football field today.

McCook County Emergency Manager Brad Stiefvater says it’s a secondary roof that had been built over the top of the original.

He said Salem was the hardest hit community in McCook County, but damage is much less than the May storm, with mostly tree damage. A few residents were without power because lines were ripped from houses when trees fell.

Steifvater is out surveying crop damage today. As far corn fields, many are laying down. He says it’s early enough in the growing season that with the help of almost two inches of needed rain, the corn may recover.

He added, some parts of the county did receive significant hail. Crops affected by that would be much less likely to come back.

Softball-sized hail was reported in Dewey County, in the unincorporated community of Promise.