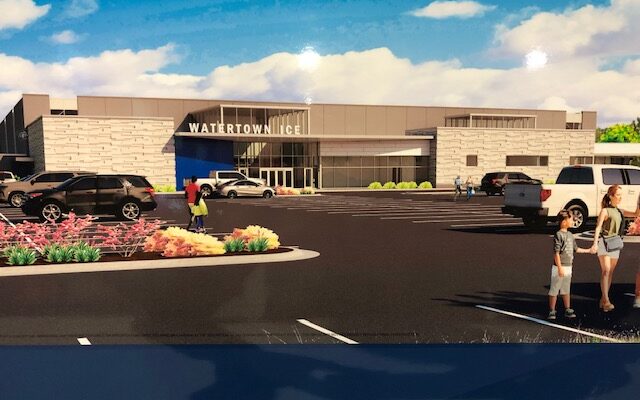 WATERTOWN, S.D.–Architectual renderings of Watertown’s new two-sheet ice arena were released for the first time Tuesday night at a, “reveal party” at Studio 212.

The crowd of onlookers also saw a 26 minute video presentation of exactly what the facility will look like, inside and out.

The city has pledged a cap of $20 million in sales tax revenue bonds toward arena construction.

A committee called, “Build It Now” wants to raise another $5 million.

KWAT News talked with the chair of the “Build It Now” Committee, Jodi Driscoll…..

Driscoll talked in more detail about the committee’s $5 million fundraising goal, and how the Watertown Hockey Association and Watertown Figure Skate Club will help them get there.. …

Watertown Mayor Ried Holien has been a vocal supporter of this project….

The arena will be built just off Willow Creek Drive, north of Watertown’s Hobby Lobby. The mayor says that’s a good location for a number of reasons….

The building will have two sheets of ice, both 85 x 200 feet in size, and will be built in such a way that a third sheet can be added in the future.

Groundbreaking on the ice arena will occur this spring or early summer.