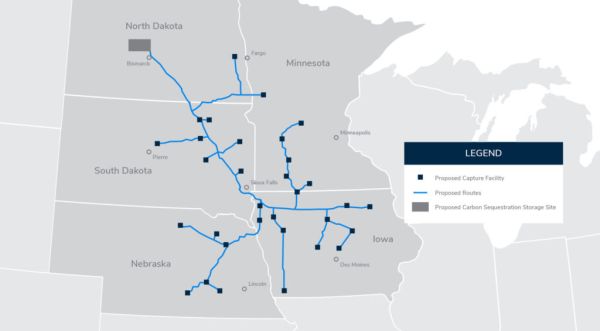 PIERRE, S.D.–South Dakota regulators on Tuesday denied an effort by some landowners to halt a company’s request to build a carbon capture pipeline.

The company did not meet the legal deadline for reaching out to some landowners that the pipeline project will impact, according to Brian Jorde, an attorney representing landowners against the project.

State law requires that within 30 days of filing an application for a project permit with the Public Utilities Commission, the company must notify landowners within a half-mile of a proposed pipeline project.

But some notices for the proposed Summit Carbon pipeline took longer than 30 days, according to Jorde.

“They missed the deadline, and that’s the black-letter law,” he said.

Commissioner Chris Nelson said he does not believe the commission has the jurisdiction to determine compliance with the law.

“What is evident is the fact that the hearing for the pipeline is in September, and there is time between now and then that anyone who received those late notices has an opportunity to become involved in this docket item if they so choose,” Nelson said.

And when PUC Commissioner Gary Hanson asked PUC staff if Summit Carbon Solutions followed the letter of the law, a staff member replied, “They filed with the spirit and intent of the law. Yes.”

The three elected commissioners unanimously denied the move to stop the project.

The Summit Carbon pipeline would transfer liquefied carbon captured from ethanol-plant emissions and transport it to an underground storage facility in North Dakota.

Ethanol producers can get more money for their product in states with stricter emission standards by shrinking their carbon footprint. One way to offset carbon dioxide emitted during ethanol production is to liquefy the carbon and bury it underground. That’s a process known as sequestration. Sequestering carbon keeps it out of the atmosphere, where it would trap heat.

Multi-day public hearings on the Summit pipeline application are scheduled to begin Sept. 11.