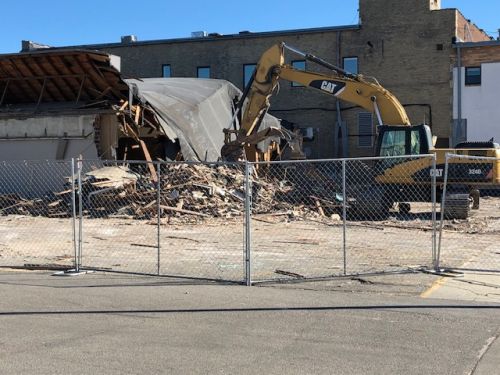 WATERTOWN, S.D.—A drive through downtown Watertown is producing a different look these days.

Demolition work has begun at the site of the County Fair Banquet Hall, adjacent to County Fair Foods.

The banquet hall is being torn down to make way for a 36-unit apartment building known as, “Parkside Place.” The apartments will be built next to a new downtown park that’s in the works just east of the Watertown Area Community Foundation offices.

Fargo developer Jesse Craig is the mastermind behind the apartment project.

He’s also about to open a 39-unit apartment building and 7,000 square feet of retail space known as, “The Lofts.” The Watertown Chamber of Commerce has announced a grand opening of 5:30 p.m. on August 20th on that project.

The Lofts are located on the site of the former Harbor Bar, which burned down in February 2019.

Craig has a third apartment building in the works. That project is called, “The Ruins.” It’ll be located at the site of the now-vacant and soon-to-be-demolished Palace Apartments on Kemp Avenue in Watertown.