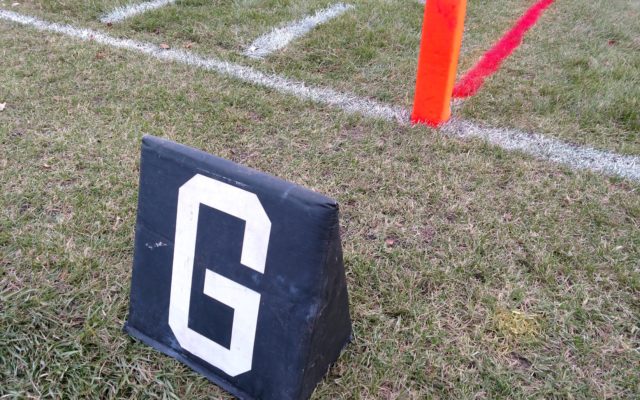 WATERTOWN, S.D. (GoWatertown.net) — It’s playoff time for the nine-man and 11B classes of football in South Dakota and Watertown Radio Sports will feature three area games.

In Class 11B, the sixteen seed Clark/Willow Lake will travel south to face the one seed Winner.  The Cyclones are 4-4 and coming off 36-34 loss against Deuel.  As heard on New Country Ks93 last week, an 80-yard pass completion Trey to Tyson Huber with 15 seconds left got the Cyclones within two but the green and white could not convert the two-point conversion costing them the game and dropping them one spot in the power point rankings.  The Warriors are a perfect 8-0 and looking to defend their 11B crown.  Game can be heard in the Clark and Willow Lake areas on 96.9 KDLO and GoWatertown.net/KDLO with a 6 p.m. kickoff.

As we move into the nine-man classes in 9AA, the seven-seed Hamlin will faceoff against the ten-seed Garretson.  A younger Charger team is coming off a 7-2 season and has aspirations of getting back to the 9AA championship game after falling in 2020 to Platte-Geddes 42-12.  Hamlin Coach Jeff Sheehan talks about his first-round opponent the Blue Dragons:

Watertown Radio · Sheehan 10 – 21 – 21 A
Garretson is 4-4 and has played one of the toughest schedules in the state.  The four losses for the Blue Dragons have come to some of the top teams in the state, Hanson, Canistota/Freeman, Howard, and Chester.  Garretson Coach Chris Long says one of the keys to victory tonight is stopping the Chargers QB Xander Sheehan:
Watertown Radio · Garretson 10 – 21 – 21 A
7 p.m. kickoff with Coach Brad DeBeer on the play-by-play coverage.  Game can be heard in the Hayti area on 104.3 KKSD and GoWatertown.net/1043KKSD
In the other 9AA game tonight in the area, Florence/Henry will host Canistota/Freeman.  The number four ranked Falcons finished their regular season with a 7-1 record earning them the sixth seed and are playing their best football of the season.  After falling at Lemmon/McIntosh in the quarterfinals last year, the expectations for the Falcons are high for a deep playoff run.  Coach Travis Schmidt talks about the rich tradition of his first-round opponent:
Watertown Radio · FH 10 – 21 – 21 A
Canastota/Freeman is 4-4 and are the 11 seed.  The four losses come to the hands of the top squads in the state, Platte-Geddes, Howard, Chester Area, and Hanson.  After moving up a class this season, a younger Pride squad has set their eyes on claiming another state championship.  Coach James Strang talks about his opponent the Falcons:
Watertown Radio · Canistota 10 – 21 – 21 A
7 p.m. kick from Florence.  The Falcons own Mitch Reed will have the play-by-play on New Country KS93 with video at GoWatertown.net/Area Sports.
Recent Articles
Top Read At GoWatertown.net