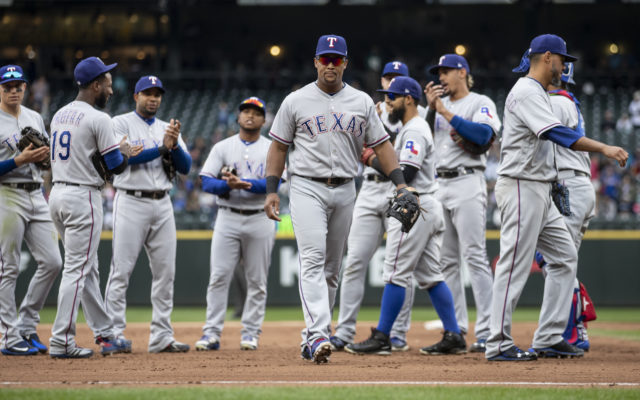 SEATTLE, WA - SEPTEMBER 30: Teammates applaud third baseman Adrian Beltre #29 of the Texas Rangers walks off the field after being replaced during the fifth inning of a game against the Seattle Mariners at Safeco Field on September 30, 2018 in Seattle, Washington. (Photo by Stephen Brashear/Getty Images)

NEW YORK (AP) – A rookie at the major league minimum would make a higher percentage of his salary than multimillionaire stars like Mike Trout or Gerrit Cole under a sliding-scale proposal by big league teams that players found “extremely disappointing.”

Major League Baseball made the proposal to the players’ union on Tuesday during a digital meeting rather than the 50-50 revenue-sharing plan that owners initially approved for their negotiators on May 11. In addition, the union said “the sides also remain far apart on health and safety protocols” aimed at starting the pandemic-delayed season around the Fourth of July.

Salaries in the major leagues range from $563,500 at the minimum to $36 million each for Trout, the three-time MVP outfielder on the Los Angeles Angels, and Cole, the pitcher signed by the New York Yankees as a free agent. According to a study by The AP, 369 of 899 players have salaries of $600,000 or less, according to the rosters frozen in March.