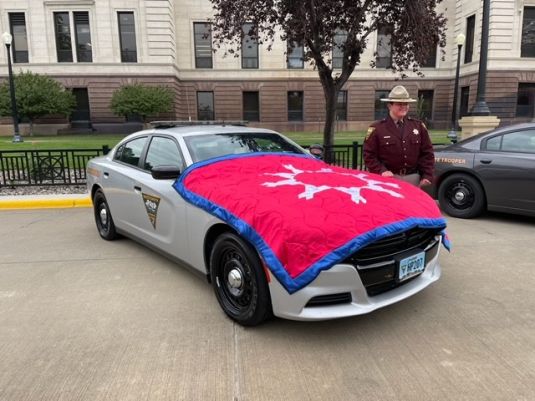 PIERRE, S.D. – The Oglala Sioux Tribe recently honored one of its citizens with the presentation of a Star Quilt after he graduated as a member of the newest class of South Dakota Highway Patrol Troopers.

“We are very proud of our grandson,” said Weston. “This is a special occasion. We need to be supportive and work in partnership with all law enforcement entities.”

Col. Rick Miller, superintendent of the South Dakota Highway Patrol, welcomed Janis to the Trooper ranks and praised the Patrol’s Youth Trooper Academy for reaching youth across the state. Janis was a member of the 2017 Youth Trooper Academy held at the Mickelson Law Enforcement Training Center in Pierre. It is sponsored by the Highway Patrol and the South Dakota American Legion.

“The Academy is a chance for high school students from every corner of South Dakota to see up close what it takes to become a Highway Patrol trooper,” said Miller.

Janis, who has been assigned to the Highway Patrol’s Badlands Squad, said he wants his selection as a Trooper to be an example to other Native American youths. “I hope this helps others choose to pursue a career in law enforcement,” he said.

The Highway Patrol is an agency of the Department of Public Safety.