NHL to move straight into playoffs 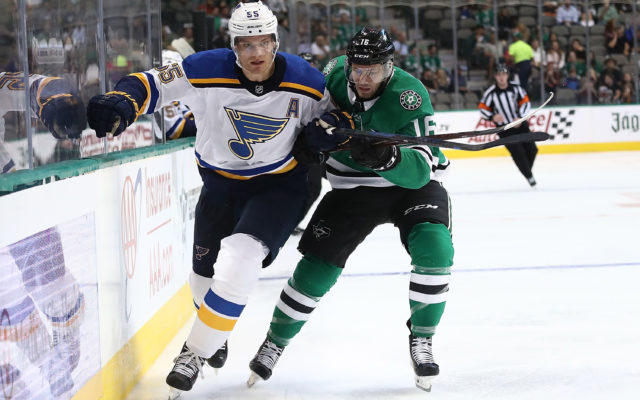 DALLAS, TX - SEPTEMBER 18: Colton Parayko #55 of the St. Louis Blues skates the puck against Jason Dickinson #16 of the Dallas Stars during a preseason game at American Airlines Center on September 18, 2018 in Dallas, Texas. (Photo by Ronald Martinez/Getty Images)

UNDATED (AP) -The NHL will abandon the rest of the regular season and go straight into the playoffs with 24 teams instead of 16 if it is able to resume play.
The decision, announced Tuesday by Commissioner Gary Bettman, is not a guarantee that games are coming back. The NHL and the NHL Players’ Association must still figure out health and safety protocols and solve other issues, including where to play.

Still, ironing out the format represents significant progress since global sports were largely shut down in March as the coronavirus outbreak turned into a pandemic. Bettman has said the goal has always been to play again and award the Stanley Cup, but details remain uncertain.

Instead of limiting the Cup chase to the usual 16 teams that qualify for the playoffs, the league and players agreed to expand the field to 24 of its 31 teams because of the unusual circumstances.

The top four teams in each conference ranked by points percentage will play separate round-robin tournaments to determine seeding. The remaining 16 teams will be seeded by conference.

Games are expected to be played in two hub cities and Bettman said and 10 are in the running: Chicago, Columbus, Ohio, Dallas, Las Vegas, Pittsburgh and Minneapolis/St. Paul in the U.S. and Edmonton, Toronto and Vancouver in Canada.