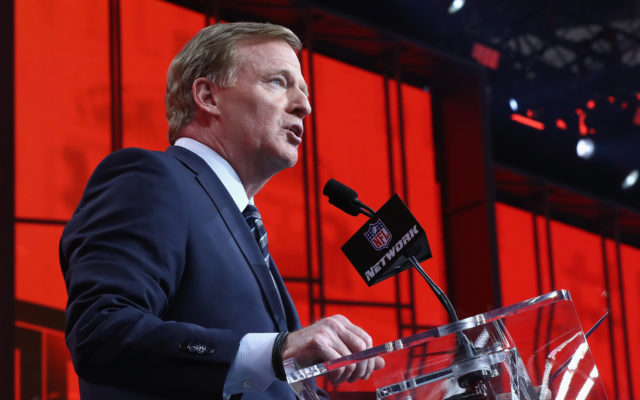 ARLINGTON, TX - APRIL 26: NFL Commissioner Roger Goodell speaks during the first round of the 2018 NFL Draft at AT&T Stadium on April 26, 2018 in Arlington, Texas. (Photo by Ronald Martinez/Getty Images)

UNDATED (AP) – The NFL will have labor peace through at least the 2030 season.

Players have approved a new labor agreement with the league that features a 17-game regular season, higher salaries, increased roster sizes and larger pensions for current and former players. The package was accepted by the 32 team owners last month and was initially rejected by the union’s executive board by a 6-5 vote. Player representatives voted 17-14 in favor, with one abstention. Union members had the final say and approved it by a 1,109-959 margin.

The 17-game schedule won’t happen before the 2021 season. The mechanics for an uneven number of games will be worked out in the interim, with the possibility of the extra game being played on neutral sites.

Owners are adding two playoff teams, bringing the total to 14. That will occur this season, with only the top team in each conference getting a wild-card bye.

Additionally, the league’s business season will start as scheduled on Wednesday. However, there was no immediate word on timing and potential format changes for the draft, scheduled for Las Vegas from April 23-25.