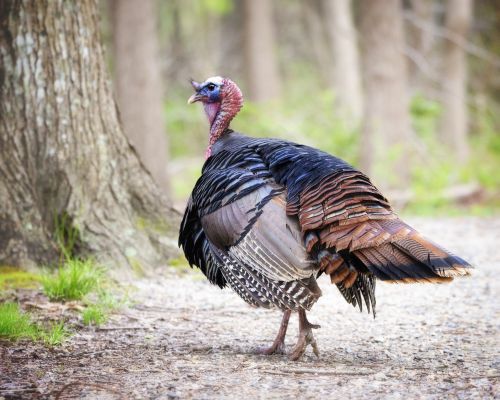 Gorgeous tom turkey or gobbler seems to pose for the camera against a beautiful forested background at the Elizabeth Morton Wildlife Preserve in Sag Harbor / Noyack, Long Island, NY.

ST. PAUL, Minn. (AP) — Minnesota’s governor and U.S. senators went to the heart of the state’s poultry country Tuesday for a first-hand look at how the top turkey-producing state is fighting bird flu, and said the state is better positioned now than it was during the devastating 2015 outbreak.

Gov. Tim Walz and Sens. Amy Klobuchar and Tina Smith visited an emergency operations center in Willmar where state and federal agencies are working to contain the current outbreak. The U.S. Department of Agriculture says it has cost chicken and turkey producers 28.2 million birds in 29 states so far. In Minnesota, the the toll is nearly 2 million birds at 40 farms.

“We remain hopeful. The fight is still on. We’ve got another four to six weeks probably, maybe a little shorter if we get some decent weather here,” Walz said at a news conference.

Klobuchar pointed out that Minnesota producers lost 9 million birds in 2015, mostly turkeys but also broiler and egg-laying chickens. Officials and the industry have learned a lot since them about how the virus is transmitted and they know better how to ward it off. And while the system for compensating farmers was “just a mess last time,” she said, that process has been improved.

Agriculture Commissioner Thom Petersen said Minnesota saw a steady increase in new cases in May 2015 before they started winding down. The state may not be halfway through this new outbreak, he said, but it’s behaving differently.

State Veterinarian Beth Thompson said this outbreak is being spread mostly by wild waterfowl, not flock-to-flock as in 2015. Commercial and backyard flock owners have stepped up biosecurity to prevent tracking it from barn to barn, she said, and that should limit the number of affected farms.

Relief is expected to come when those migrating waterfowl make their way through the Midwest, she said. Bad weather has caused many of them to stop in the region and leave the virus behind. Officials can’t make those birds leave, she said, but they will head north as the weather improves.

The leaders also said more mental health services are now available to help producers and farm workers cope with the stresses and financial shocks from having to destroy entire flocks.

“Everybody needs help at one time or another, and asking for help is a sign of strength, not of weakness,” Smith said.