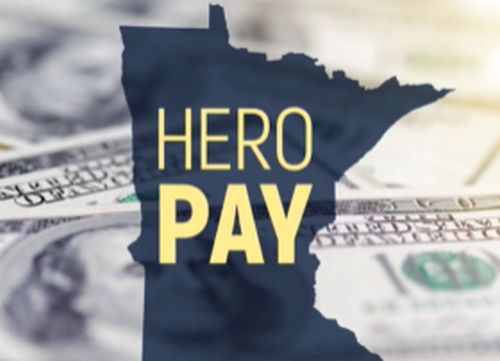 ST. PAUL, Minn. (AP) — More than 1 million Minnesotans have qualified for bonus checks to frontline workers to recognize their work during the COVID-19 pandemic, but the payments will be for less than $500, the governor’s office announced Monday.

The state will start sending out the payments on Wednesday. The Legislature approved a total of $500 million for eligible applicants, and Gov. Tim Walz signed it into law in April.

“To a working family, $500 is very meaningful … it will be a boost for my family and many other families,” said Gene Sparks, an EMT who worked at St. Francis Regional Medical Center in Shakopee during the pandemic.

Many frontline workers faced long shifts, uncertain procedures and constant threats of infection that kept them worried throughout the day and sleepless at night during the first year of COVID-19, he added.

“The payments made this week should only be the start of the gratitude that our state shows,” Sparks said. “But today, we take a moment to pause and celebrate this win.”

Nearly 1.2 million applications were submitted during the 45-day application period this summer. The state approved 1,025,655 of them, which means the individual payments will be $487.45.

Every person who applied will receive an email by Wednesday informing them of whether or not they were approved, and next steps, said Nicole Blissenbach, temporary commissioner of the state Department of Labor and Industry.

Frontline workers who chose direct deposit should get their money within seven to 10 business days; those who chose to get their payments via debit cards will get them within three to four weeks.

The money is subject to federal income tax but not state income tax, Blissenbach added.

State officials originally estimated the final pool of qualified workers would be around 667,000 with payments of about $750 apiece, but applications exceeded expectations.

Democrats pushed for $1 billion in payments but eventually compromised with Republicans for $500 million. The deal marked one of the few big bipartisan successes of the 2022 legislative session, which was marked mostly by stalemates over how to spend a $9.25 billion budget surplus.

“I’m just happy that we’ll finally get this payment,” said Keith Farr, a meat cutter at a Lunds & Byerlys supermarket.

He said a particularly difficult time was during the stay-at-home order when his three daughters — ages 16, 13 and 10 — were at home and attending school online at the beginning of the pandemic.

“It required more food. It was hard for the girls to stay focused. It was tough,” Farr said. His wife stopped working in order to support their daughters, “and it cut our income in half at the time that it was most needed.”

Farr said he plans to use his frontline worker check toward rent. He said he would’ve liked the check to be a little bit more, but that the $487 is better than nothing.

When asked if legislators might approve more money for frontline workers, given that Democrats had to settle for less than they wanted, Democratic Rep. Cedric Frazier, of New Hope, said, “I personally believe we should take more action … but we’ll have to see what that looks like in the next session.”