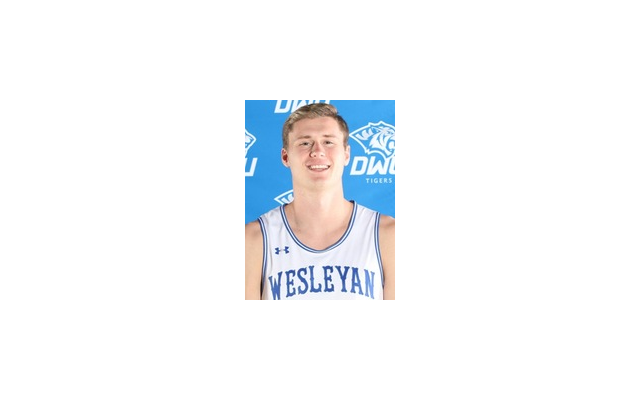 MITCHELL, S.D. – Less than a week after the Dakota Wesleyan University men’s basketball team lost in a double-overtime thriller at the Corn Palace, the Great Plains Athletic Conference announced the 2020-21 All-GPAC Team. Four members of the DWU men’s basketball program were selected to the All-GPAC Team, including a pair of first team members.

The Tigers finished with at least two All-GPAC First Team honorees in six of the past seven seasons. The pair of Tigers that finished on the first team were senior Nick Harden (Chicago, Ill.) and junior Koln Oppold (Sioux Falls, S.D.). Mason Larson (Langford, S.D.) and Jeffrey Schuch (Dell Rapids, S.D.) were also tabbed to the honorable mention team.

Harden also ranked fifth in the NAIA with 59 steals on the season and was 10th nationally in steals per game. In his impressive career, the 5-foot-10 guard finished with 1,283 points, 288 assists, 163 steals and a 44.3% field-goal percentage.

Joining Harden on the first team for the first time in his career was Oppold after an impressive junior campaign. Oppold paced the Tigers with 8.2 rebounds per game and was second on the team with 13.7 points per outing. He also finished tied for fourth in the GPAC with eight double-doubles this season.

Having one of the most impressive defensive seasons in the GPAC, Larson was honored with an honorable mention nod. On the defensive side of the ball Larson led the conference with 1.6 blocks per game and 36 blocks on the season, despite missing three games near the end of the season.

Larson led the team in blocks and blocks per game, while checking in at third with 11.2 points per game. He also hauled in 6.2 rebounds per game, including 5.5 defensive rebounds per contest. Larson tallied career highs against Mount Marty in December with 29 points on 10 made baskets and four made 3-pointers.

The fourth Tiger making the All-GPAC list was Schuch, who started each game this season. He averaged 9.6 points and five rebounds per game. He recorded a career-high 21 points against Midland at home, while adding a career-high 13 rebounds against Mount Marty in the GPAC playoffs. Schuch scored double figures in 13 games this season.