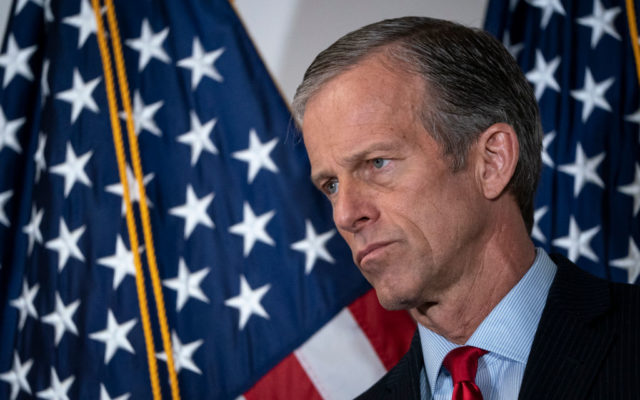 Senator John Thune will serve a historic fourth term as the senior United States senator from South Dakota – a seat to which he was first elected in 2004 – despite his challengers’ attempts to paint him as a creature of Washington.

“Only in America can an ordinary kid from Murdo, SD have the opportunity to get to serve the state of South Dakota in the U.S. Senate,” Thune said.

The AP called the race Tuesday night for Thune with 69% of the vote. Democrat Brian Bengs and Libertarian Tamara Lesnar had 27% and 4%, respectively.

Bengs said the results tell him that many South Dakotans are simply unwilling to vote for a Democrat.

“The media environment, the information environment that we have in this country, in South Dakota, is very good at conditioning people to vote against their own interests and against what they believe because of the letter behind somebody’s name,” Bengs said.

Libertarian Lesnar said the hurdle she ran into was getting out her message to enough voters.

“This isn’t the end for me,” Lesnar said.

Senator Thune was South Dakota’s Congressman from 1997 to 2003. He then defeated Senate Democratic Leader Tom Daschle in 2004, portraying Daschle as a creature of Washington.

Thune said there are some critical issues ahead….

Historian and Thune adviser Jon Lauck said calling Daschle “too Washington” was effective because Washington D.C. Democrats are ideologically out of line with most South Dakotans – whereas Washington D.C. Republicans are not.

“The crucial difference between Sen. Thune and Senator Daschle is that Thune is closely aligned ideologically with his state, which is obviously conservative, while Sen. Daschle represented the party of the left, and therefore his representation ran counter to a reddening home state,” Lauck said.

Thune was selected to serve as the minority whip in 2020.

The only other South Dakotan to be elected to the U.S. Senate for four consecutive terms was Republican Karl Mundt of Humboldt (1948-73).