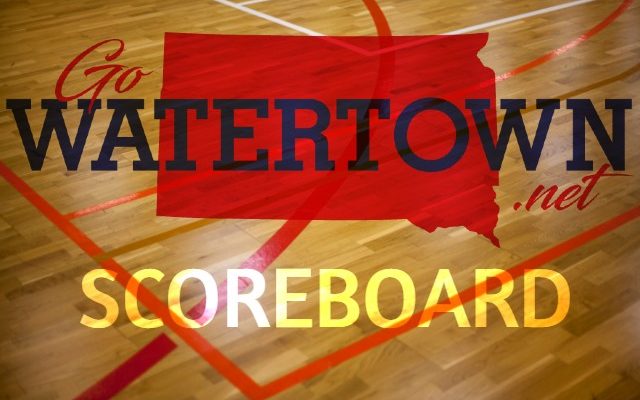 Girls State B – Watertown Civic Arena
State B Bracket HERE
Viborg/Hurley 63, Aberdeen Roncalli 57
Down goes the number one. The eight-seed Viborg/Hurley upset the one seed Aberdeen Roncalli 57-63 to open the Class B Tournament at the Watertown Civic Arena. Led by 41 percent shooting from beyond the arc, three reach double figures for the Cougars led by Coral Mason with 19 points, Denae Mach added 18, Estelle Lee had 15. Madelyn Bragg led Roncalli and all scorers with 23.

Corsica-Stickney 49, White River 43
The defending Class B champion White River would fall to Corsica-Stickney 49-43. Avery Broughton had 21 points, 11 of those from the charity stripe, and grabbed 11 boards. The Jaguars would shoot 75 percent from the plus one line to seal up the victory. Maleighya Estes has 22 for the Tigers.

De Smet 52, Aberdeen Christian 44
As heard on 104.3 KKSD, De Smet would use a big second half, field by Kennadi Buchholz 28 point performance, to slide past Aberdeen Christian 52-44. Buchholz would go 10 of 15 from the floor and grab 11 boards. Mallory Miller with the double-double for the Knights, 19 points, and 12 rebounds.

Faith 54, Wall 34
Faith would outshoot Wall 39 percent to 18 percent in a 54-34 victory. Cassidy Schulke and Kaycee Grove each notched 15 points for the Longhorns. Paige Kjerstad had 11 points and 11 boards for the Eagles.

Girls State A – Frost Arena, Brookings
State A Bracket HERE
Wagner 68, Red Cloud 62
The eight-seed Red Cloud almost pulled off the upset for number one Wagner in the opening round of the Class A Tournament at Frost Arena. Down 58-46 heading into the fourth frame, the Red Raiders held the Crusaders to just four points while scoring 22 of their own to grab the 68-62 victory. Stevi Fallis scored 23 for Red Cloud. Emma Yost and Ashlyn Koupal each had 17 for Wagner.

West Central 65, Dakota Valley 52
Three Trojans would score in double figures in a 65-52 West Central win over Dakota Valley. Tabor Teel and Addy Kramer each with 18, Rylee Halderman with 17 for the Trojans. Rylee Rosenquist and Grace Bass notch 16 points each for Dakota Valley.

Rapid City Stevens 39, Rapid City Central 34
Stevens beat Central for the third time this season 39-34 in the battle of Rapid City. Macey Wathen has 17 for the Raiders. Sadie Glade 11 for the Cobblers.