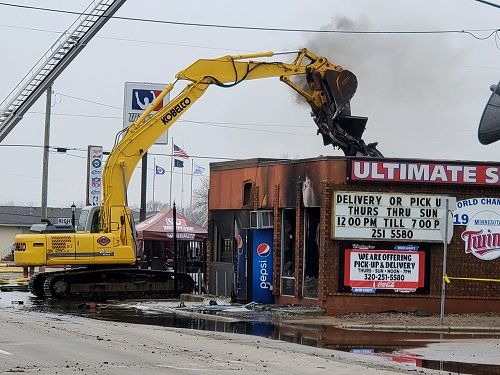 Brian Kasper works at Good Guys Motor Company across the street and was the first to call 911. He says he saw a lot of black smoke coming out, and then “the flames burst through the front window.”

He says he called 911 and got a voicemail message, so he hung up and called another number, which routed him to the Waite Park City Hall, who told him to call 911. A short time later, Waite Park police arrived on the scene, and the fire trucks arrived shortly thereafter.

He says losing the Ultimate is going to leave a huge hole in the community.

“It’s a great place, especially since they added that new outdoor patio and have live bands. It’s always been really busy, so it’s sad. It’s sad to see it burn. Hopefully, they can rebuild and move on.”

Debbie lives close by and says the Ultimate is the neighborhood hangout.

“This is the place to go. It’s a busy place. So, this is really sad, and I feel really bad for the owner. This is just really sad to watch.”

The fire started before 9 a.m.

There is no word on a cause. The state fire marshal has been called in to help with the investigation.