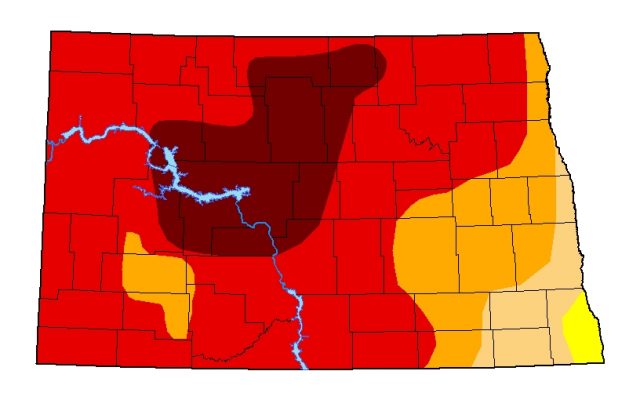 BISMARCK, N.D. (AP) — Federal agriculture officials were continuing their tour of drought-stricken North Dakota Thursday, to hear directly from farmers and ranchers about how one of the driest years in recent history is affecting their livelihood.

The two-day tour took the group to a federal Agricultural Research Service grazing unit in Mandan Wednesday with a second stop in Minot. Thursday’s stops are in Carrington and Argusville.

Lt. Gov. Brent Sanford, who joined the tour group, said a shortage of hay is among the biggest concerns for producers.

“It’s not going to be a good year anywhere,” he said. “We’re asking for flexibility. If there’s a total loss, can you take what’s there and hay it.”

Producers want to graze some failed crops but feel stifled by some of the rules in place, said Sterling farmer Lucas Lang, who serves on the North Dakota Farm Bureau board.

“We’ve got to get cows out on these crops that are shot, and we’ve got to do it without the grazing or haying (insurance) penalty,” he said.

A plan to allow emergency haying on land enrolled in the Conservation Reserve Program before Aug. 1 is in the works, Hoeven said. Acreage in the program is usually left idle to prevent erosion and provide wildlife habitat.

Ducheneaux ranches on the Cheyenne River Sioux Reservation in South Dakota. He said any new programs or adjustments need to be made with a long-term outlook in mind.