Day one of Girls B saw two upsets; rest of the tournaments postponed 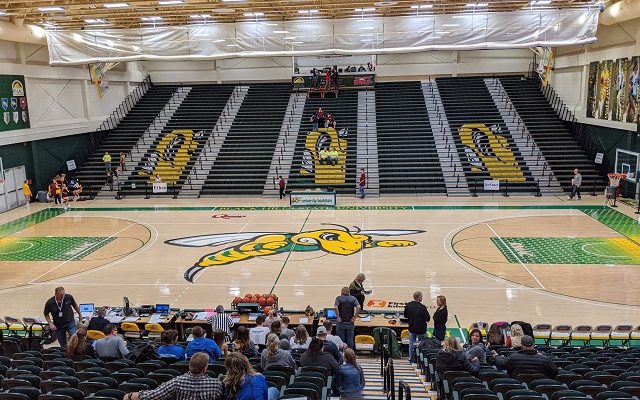 SPEARFISH, S.D. (GoWatertown.net) — In the opening round of the Girls State B Basketball Tournament on Thursday.

The one seed Corsica-Stickney downed Irene-Wakonda 65-42.

The Jaguars were led by Avery Broughton with a double-double, 21 points and ten boards. Nora O’Malley led the Eagles with 11 points. Corsica-Stickney outshot Irene-Wakonda from the field 51 percent to 30 percent.

In game two on Thursday

Faith first half pressure was just too much for Howard as the Longhorns would come away with a 56-34 win.

Kaycee Grove would lead all scorers with 17 points going six of 14 from the field, four of seven from the 3 point line and one of two from the charity stripe. Lindsey Wilken and Sydnie Schauer would each contribute 14 points.

Howard was led by Kenedy Koepsell with 16 points going four of ten from the field, two of six from downtown and a perfect six of six from the line.

Game one of the night session saw an upset as the seven seed Castlewood downed the two seed Ethan 45-43.

Alayna Benike led the scoring attack for the Warriors with 20 points going eight of 12 from the field, three of four from beyond the arc and one of three from the line. Darah DeKam grabbed a double-double with eleven points and 17 boards.

Cameryn Logan was the lone Rustler in double figures with 15 points going seven of 13 from the field and grabbing nine boards.

The final game of the night session saw another upset as the six seed and defending champion DeSmet defeated the three seed Faulkton 50-45.

The Bulldogs were led by Reyna Beck with 20 points going three of nine from the field, three of five from three point land and 11 of 14 from the line. Kennadi Bucholz added 16 points and eight boards.

The Trojans, who are in the tournament for the first time in program history, saw Brooke Niederbaumer with 18 points going seven of 11 from the field and grabbing six boards.

On Friday morning the South Dakota High School Activities Association announced that the rest of the Girls B was postponed due to the COVID19 outbreak.  The Boys B, combined A and AA tournaments and Visual Arts have also been postponed.  The Student Council Convention and all Region music contests for the month of March have been cancelled.