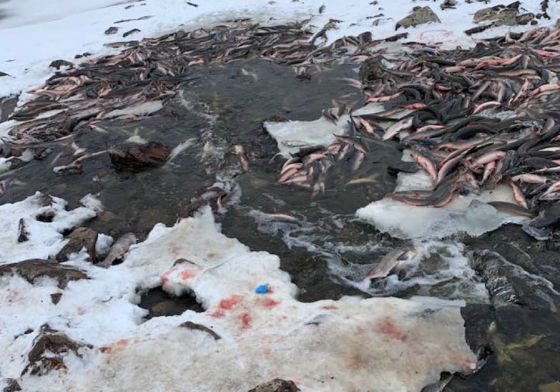 HURON, S.D.–A recently completed James River dam project was the site of a massive fish die-off in Huron last week, but state officials say the cause of the deaths is unclear.

A state official says they are monitoring the situation on the ground and may restock the affected area of the river.

The fish kill was the subject of a TikTok video that was also shared on other social media platforms. In the video, a man blames the dam project for the situation and levels a series of expletives at the engineers and city leaders who designed and approved it.

A renovation of the Third Street Dam was intended to prevent human drowning in the James River, according to city officials but it has also caught hundreds of dead fish, most of which were carp.

The dam was built in 1936 to create a small reservoir for the city’s water supply. The city has since changed its water supply to ground wells and the Missouri River, but the reservoir is still used for recreation.

Although the upstream depth of the dam is only a few feet, the downstream depth at the face of the 3rd Street Dam was about 14.5 feet prior to the rock installation. Water flowing over the dam created a strong recirculating current that pulled swimmers under the water.