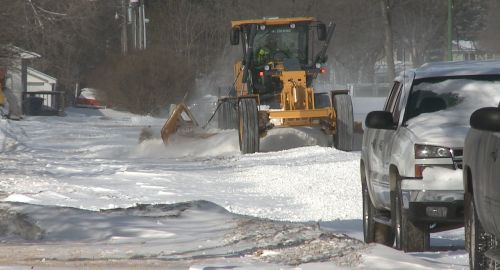 WATERTOWN, S.D.—Watertown Mayor Sarah Caron has no complaints about the snow removal efforts around town, and that includes the work done after a storm in late December that dumped nearly a foot and a half of snow.

She talked about it during Monday’s Public Works, Finance and Safety Committee meeting….

The snow emergency routes Caron spoke of will always be bladed first…..

And she reminded people how important it is to get parked vehicles off streets or avenues before the plows come by…..

City Engineer Heath Von Eye says with some ice-covered streets around the city, some have wondered if the Street Department has enough salt and sand at its disposal. He says the answer is “yes, they do”…….

Monday’s discussion did not touch at all on snow gates, which are attached to plows and are used to prevent a ridge of snow from lining the end of driveways when plows come by.