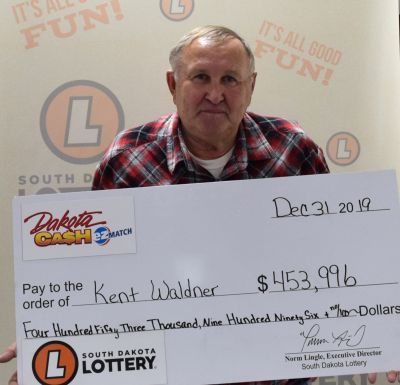 PIERRE,S.D.—Thanks to Saturday’s Dakota Cash drawing, Kent Waldner will get a late Christmas gift in the form of a new home.

Waldner’s big win marks the fourth-largest jackpot in Dakota Cash history, and he has very specific plans for his prize.

“I’m going to buy a house,” Waldner said. “I live in a 100-year-old house that is falling apart. I won’t have to worry about anything. I will walk into a warm home. I’m going to have a better place to live. It’s great.”

While the drawing took place Saturday, Waldner was unaware of his win until Tuesday. He learned of his win while routinely scanning his tickets at Carlson’s Northside Service. What seemed like just another ordinary day became a memorable one, as he and one of the business’s owners soon had reason to celebrate.

“I was at Carlson’s, and I had no idea. I don’t look at the numbers until I turn (his tickets) in. If I win something, great,” Waldner said. “(The store owner) was so elated. She jumped up and down and gave me so many hugs.”

Waldner noted that he usually purchases Dakota Cash, Mega Millions and Powerball tickets each week at Carlson’s Northside Service—a tradition he plans to continue. He also left a bit of advice for his fellow players looking for their big win.

“Enjoy your winnings and keep playing. The only way you’re going to win is by playing,” Waldner said.