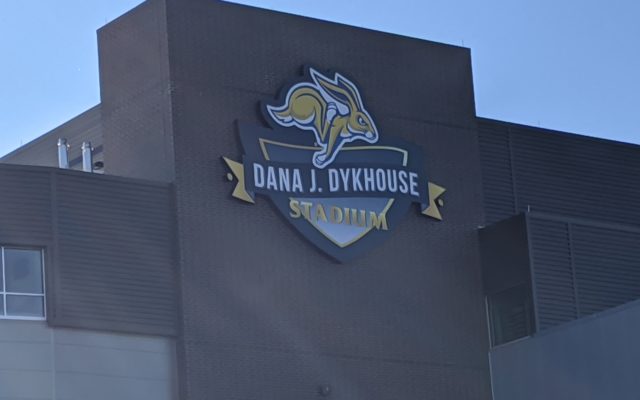 BROOKINGS, S.D. (GoJacks.com) — The Blue squad intercepted three passes in the first half and came up with a final defensive stand in the red zone in the closing seconds to secure a 10-6 victory over the White team in South Dakota State football’s Hobo Day Scrimmage Saturday afternoon at Dana J. Dykhouse Stadium.

After Quinton Hicks batted a pass at the line of scrimmage and came away with the first interception of the game on the opening drive, the Blue team put the first points on the board with a 46-yard field goal by Cole Frahm. Redshirt freshman quarterback Karst Hunter put his squad in scoring position with a 36-yard rush on the first play from scrimmage.

Following a short punt in blustery conditions, Blue pushed its advantage to 10-0 in the closing minutes of the first quarter. Devin Blakley capped a six-play, 33-yard drive with a 3-yard touchdown run. Blakley ended the day with 30 yards on nine carries.

The defenses took over in the middle two quarters with neither team getting past the opponent’s 40-yard line until the White squad bridged a scoring drive between the end of the third and start of the fourth quarters.

Freshman quarterback Mark Gronowski took over under center for the White team and completed 3-of-4 passes for 36 yards, including a 7-yard touchdown to Jadon Janke that finished off a 10-play, 67-yard scoring drive.

Gronowski again led the White squad down the field in the waning minutes after taking over at its own 10-yard line. He completed passes of 15 and 14 yards to Tucker Kraft early in the drive before connecting with Canyon Bauer for 23 yards to the Blue 15-yard line. However, on fourth down from the 11, Gronowski’s final pass of the day, intended for Zach Heins near the goal line, was broken up by Graham Spalding to end the game.

Gronowski finished the afternoon a combined 13-for-28 passing for 134 yards.

Defensively, Kinser Madison was credited with a game-high eight tackles for the Blue team. Torren Union and Malik Lofton tallied the squad’s other interceptions.

UP NEXT
The Jackrabbits are scheduled to open the 2020-21 season Feb. 20 at Southern Illinois.