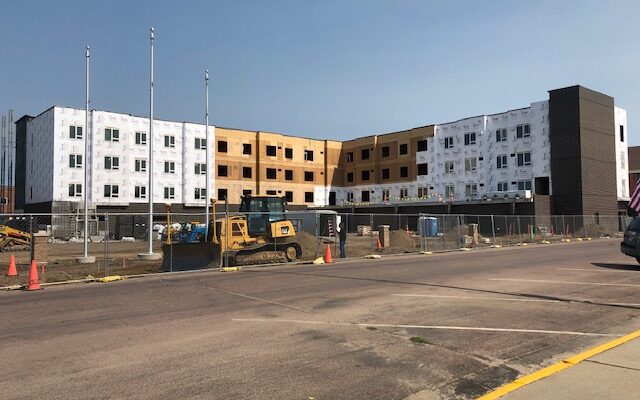 WATERTOWN, S.D.–Another apartment building that’s under construction in downtown Watertown is within a few months of opening.

The Ruins, as named by developer Jesse Craig, is being built along Kemp Avenue on the site of the former Palace Apartments, which were demolished.

Developer Jesse Craig tells KWAT News about the timeline for getting the 63 unit, four-story building opened up for tenants….

The Ruins (pictured) comes on the heels of several other Craig Development apartment projects in Watertown, including The Lofts, Parkside Place and Generations on First.

Craig says there continues to be demand for apartment-style living close to, or in, the downtown area….

Craig Development is also working on The Plains, a 216 apartment unit project consisting of three buildings on North Highway 81. Craig describes that as a workforce development project.

Additionally, Craig is planning on building two 72-unit apartment buildings near the new Prairie Lakes Ice Arena on Watertown’s east side. But Craig says talks with city officials about building a downtown parking ramp have died.

You can hear Mike Tanner’s full conversation with developer Jesse Craig at 9::00 Tuesday morning on “What’s Up” on KWAT.